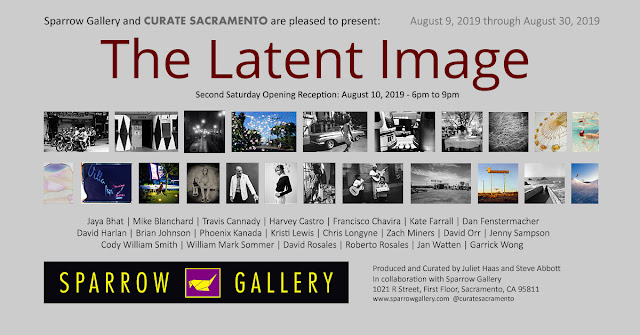 A latent image is an invisible image produced by the exposure to light of a photosensitive material such as photographic film. When photographic film is developed, the area that was exposed darkens and forms a visible image. In the early days of photography, the nature of the invisible change in the silver halide crystals of the film's emulsion coating was unknown, so the image was said to be "latent" until the film was treated with photographic developer. ~ from Wikipedia

The community of photographers in Northern California is vast and varied. With the advent of digital photography and the increased access to ever-evolving imaging technology, it has become easy for one to grab a new digital camera or a smartphone and present oneself as a photographer. According to a 2014 study, there are more than 1.8 billion photos uploaded to the Internet every day. Mind-boggling.

A steadily emerging trend among that community of photographers has been a discovery of or return to film and vintage cameras. What started as a small community of folks looking to slow down and hone their craft has turned into a renaissance of film and the physical image. This “latent” community has developed into a movement that has Kodak starting to manufacture films that were long discontinued and entrepreneurial endeavors producing new film emulsions and film-related products around the world.

It is with great pleasure that we celebrate this community of artists committing themselves to the craft of photography with film as their medium with The Latent Image.